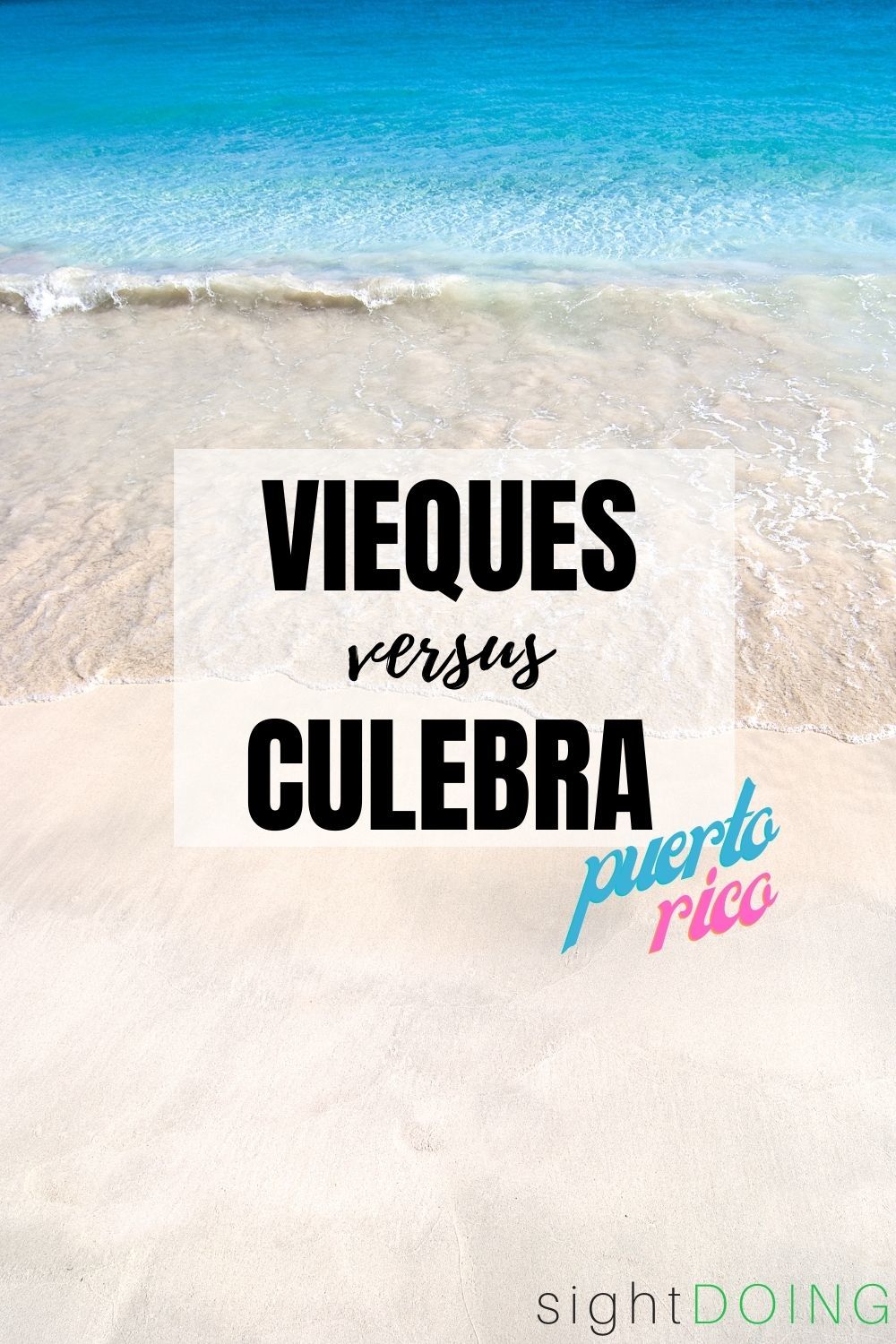 It sounds crazy to leave one island for another, but that’s exactly what I did. There are two small islands off the east coast of Puerto Rico, each with major claims to fame:

Vieques, the largest island other than Puerto Rico itself, is home to the brightest bioluminescent bay in the world.

Another great side trip, Culebra consistently wins prizes for having one of the world’s 10 best beaches.

In my opinion, the beaches around San Juan aren’t great.  They win points for being convenient (and, you know, for year-round tropical weather), but they don’t have the soft white sand and warm turquoise water that I dream about.  You have to head to either Vieques or Culebra for that.

Both islands also offer a laidback vibe in the best of ways. There’s none of the crazy traffic you’ll find around San Juan, no crowds, and plenty of peace and quiet.  Our goal on this trip was to “get away” from real life which meant I wanted to subtract stress and these destinations fit the bill.

Short on time? Watch the video below instead of reading the article.

I almost didn’t go to Culebra, assuming that Vieques would fit the bill for what I was looking for, but I let their marketing get to my head.  If you read online forums, you’ll find a huge group of loyalists saying it’s the greatest vacation on earth.  There’s one story after another of someone who visited for a day trip, came back for two weeks the next year, and bought a vacation home the year after that.

I had to see it myself.

That clear water?  Not photo-shopped.  Even on a weekend, the crowds were light and there was no trash, no vendors coming by every three minutes to sell you a necklace you don’t want.

Walking that beach is like floating over powdered sugar.  The sand dusts between your toes, never sticking to your skin, while softly massaging your soles.

Is it the greatest beach in the world?  No, probably not.  I liked a few in Barbados better, but then again I prefer a few amenities for my beach day such as a rental chair and umbrella.  At Flamenco Beach, you’ll need to bring your own (a cooler of cold drinks and snacks wouldn’t hurt either). Regardless, it’s a world class beach!

Pack for the Beach

Find out why I take baby powder to the beach, plus more must-have beach items (link opens in a new window).

The island’s best snorkeling is on Playa Tamarindo, a hop, skip, and jump away from Flamenco.

From Flamenco Beach, there’s a trail in the back of the parking lot that takes you on a 30-minute walk to Carlos Rosario.  The snorkeling there is also supposed to be great, but I ran out of time to squeeze this in.  If you have time, I’d add it to your exploration plans as well.

There were several reasons I didn’t take the ferry to Culebra.

1) It’s time-consuming, at least for a day trip.

You’ll need to drive an hour from San Juan to Ceiba where you’ll then catch a 45-minute boat ride.  That’s not too bad, but you also need to arrive at least an hour early to buy tickets in person (and even then, it might already be sold out).

Assuming you want the fast catamaran, there are only three departures each way.

Technically there is also a cargo ferry (which does sell foot passenger tickets), but it takes longer and gives priority to residents who NEED to transport goods back and forth so it’s hard to get tickets.

Whether you take the ferry or a flight, once you get to the island, you’ll need to rent a car/golf cart (pricey), call for a taxi (yes, you have to call; you won’t magically find one), or walk.  It’s a 40-minute walk from the airport to Flamenco Beach, making it borderline doable.

Read More About the Vieques Biobay

Find out about the evening tours to this spectacular experience.

Vieques is ready for you, but not if you require perfection.  Power outages are still common (and indeed the town lost power for ~40 minutes one morning during my stay) and you can expect to cool down from cross-breezes instead of air-conditioning.  Depending on your foodie status, you’ll either label restaurants as “unpretentious” or “downright basic”, but on the bright side, you’ll find craft beer and live music.

There’s enough to do on Vieques that you could spend several days: horseback riding, snorkeling, fishing charters, watersports, even a small fort.  We chose to spend our time in San Juan exploring instead, but it’s definitely cheaper and more easy-going on Vieques if that’s your thing.

For a single night, you can easily visit Vieques without a car rental.  Base yourself in Esperanza so you can walk to the meeting point of the biobay tour, make your way to restaurants, and spend time at Sun Bay independently.  A taxi from Isabel Segunda (where both the ferry and airport are) will cost you $15 each way and MUST be arranged in advance.  Cars won’t be waiting for you!

We stayed at Casa de Tortuga: with a pool, air-conditioning, and mini-fridge, it’s the third nicest place in Esperanza.  Malecon House and El Blok are nicer, but double the cost.

Since you’re spending the night and precise scheduling is less important, the ferry is a more viable option for Vieques.  The trip from Ceiba takes about 30 minutes; again, you’ll need to arrive early to buy your ticket in person, but in general there are less horror stories about trips being sold out. 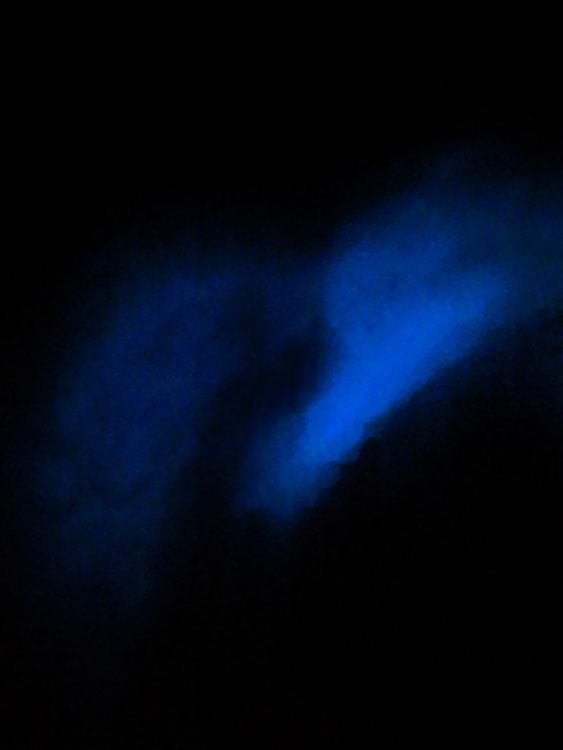 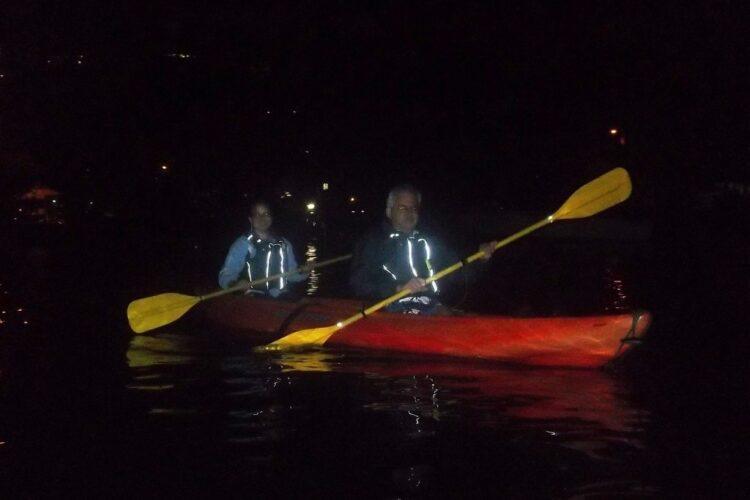 24 thoughts on “Vieques vs Culebra: Differences Between Puerto Rico’s Islands”