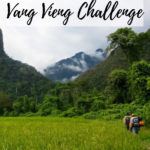 For a few years now, I’ve been suffering  from “accident prone” syndrome.  I assume it’s because I’ve become more physically daring and not because I suddenly became more clumsy, but nothing has ever beat me up the way the Vang Vieng Challenge in Laos did.

In theory, the Vang Vieng Challenge combined a lot of things that I love to do: hiking, camping, via ferrata, ziplining, rappelling down a waterfall, and free-fall abseils.  In reality, nothing seemed to go right for me.

But I’m getting ahead of myself.

The trip started just fifteen minutes from town, where my companion and I set off on a hike accompanied by two guides.  The scenery outside Vang Vieng is spectacular and I was really excited to be spending the next two days outside.

The trail starts out innocently enough, though we had been warned we’d end up hiking for five hours with much of it uphill.  Since we had recently finished a four-day uphill trek in the Himalayas, I wasn’t concerned.  We could handle it.

Quickly, the trail began to narrow to the point where “overgrown” is an understatement.  Unphased, our guides pressed onward, and I sucked it up as pricker bushes scratched my legs with every step.  Barely twenty minutes into our adventure, I wanted to turn around.  If this was the easy part, we weren’t off to a good start.

Yet onward we went.  We walked through cow pastures and crossed streams and at one point, took a canoe that barely stayed afloat with the four of us inside.  As we approached late morning, the day warmed up considerably, just in time to begin our uphill trek.

Ascending steeply, the Vang Vieng Challenge lived up to its name.  There was nowhere to go but up.  The trail was slippery, slick clay covered in a layer of mud: a strenuous climb in any condition made more difficult by recent rain.  Clay covered the bottom of my hiking shoes, leaving me with a smooth sole and no traction.  Without a grip, it was two steps forward, one step backward.

Each time we stopped, I caught my breath and drank some water only to end up hot and out-of-breath a few minutes later on the next climb.  I had to remind myself over and over that soon we’d be starting the fun part.

Grumpily, I spent my lunch break picking leeches off my ankles.  When you spend enough time outside, leeches and other annoyances are just something you have to expect.  I’ve dealt with them before and they’re nothing more than a nuisance.  But when everything’s going wrong, the little things become more significant.  All I wanted was a comfortable break and instead I was pulling slimy creatures off my skin and watching blood run down my ankles.

Finally, a great thing happened!  We were starting the fun part!  We had a zipline across the gorge followed by a via ferrata course.  I could start enjoying the trip!

Of course, this wouldn’t be the Vang Vieng Challenge if it were easy.  To ensure we’d be tested yet again, our first zipline had a tree in the way that you’d have to navigate around.

Surviving our obstacle course, we geared up for the next phase of our journey: the via ferrata.

If you’re unfamiliar with what a via ferrata is, it’s a cross between rock-climbing and scaling a ladder.  Instead of belaying with a rope, you simply clip yourself in with carabiners and start climbing.  It’s surprisingly easy and a lot of fun.

I quickly fell into the rhythm of unclipping, stepping, reaching, re-clipping, finally…happy that things were going well.  Things were finally looking up and I thought maybe this trip had potential after all.

As we reached another section of the via ferrata, rocks started falling.  One clocked me in the shoulder and I started dodging things.  To the left!  Duck!  Now to the right!  I survived half a dozen rocks and then I zigged when I should have zagged.  I was left with a big bruise on my inner arm.  Nothing on this trip was going my way.

I wouldn’t say I was particularly injured, just continually being beaten up, until the via ferrata ended and left us to scramble across wet, slippery rocks.  Of all the places to be comfortably clipped in, it was here — and yet this was the section we were left balancing on our own.  I slipped not once, not twice, but three times.  Slowing to a snail’s crawl, I felt defeated.

We had one last small climb and a bridge to conquer before we made it to the campsite.

Usually, I dread the end of a tour and want the fun to go on forever, but this time I was anxiously anticipating the finish.  Just one long step forward on the bridge, and I’d be on solid ground.  Panting to catch my breath, I took that final step…only to watch a full liter of water tumble down the waterfall.  I was hot, thirsty, and tired; losing that water made me want to cry.

I wanted nothing more than to sit in an air-conditioned room, lock the door, and watch a movie or do something equally sluggish.  Instead, I was on top of a mountain having one of the worst travel experiences of my life.

The surprising highlight of the trip was an unadvertised challenge: dinner.

Who knew that fresh maggots tasted like french fries?  These little bugs were one of the best parts of the trip, which says a lot about the tour.

The next morning, I woke up in my tent sore from my bruises, covered in itchy bites, and telling myself there was a massage waiting for me in town at the end of the day.  Today would be better, I promised myself.  It couldn’t possibly be worse.

And so, hoping to avoid yet another injury, I passed on one of the activities that I probably would’ve enjoyed and instead cheered on my companion who skillfully rappelled down a waterfall.

The next few hours were actually enjoyable though.  A new day brought new activities, and I gleefully ziplined and abseiled my way down the course.

Unfortunately, all good things must come to the end and we had to hike back down the way we came.  The steep, slick trail that was difficult on the way up was treacherous on the way down.  We both consistently lost our footing and struggled to make our way down without twisting an ankle.  Eventually, it became easier to treat the trail as a slip and slide, scooting on my butt in the steepest sections.  After one last stop to remove leeches, there was nothing left to do but return via the pricker bushes.

I made it back to town, scratched, scraped, bruised, bleeding, itching, and covered in mud.  Sometimes, even in retrospect, adventure travel sucks.

This trip was supposed to be non-stop thrill and instead it was one hour of fun buried under thirty hours of frustration.

If you’re a masochist, you can book this tour through Green Discovery which has storefronts in all Lao tourist cities or a complicated online booking procedure.  Supposedly it’s better in the dry season, but I won’t be doing it a second time to find out for myself.

Not all my travel experiences go smoothly, and I think it’s just as important to share the bad ones as the good ones.  I wish I could recommend this tour, but in my opinion, it was terrible.  For a better time, check out my favorite experiences from Laos.