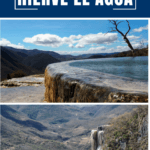 I was a little apprehensive walking to catch the Hierve el Agua bus.  The last time I went somewhere based solely off a picture, I was underwhelmed.  I really hoped this time would be different.

An hour and a half outside of Oaxaca, Hierve el Agua is one of two petrified “waterfalls” in the world (the other is in Turkey).  Over thousands of years, calcium carbonate and other minerals from flowing springs built up and hardened, creating tall white rock formations that tower over the surrounding valley, similar to the way stalactites are formed in a cave.

Although the waterfall-looking formations are cool, no one would travel there just for that.  Nope, the real draw is the natural pools overlooking these cliffs that you can swim in.  Not only are they visually captivating, but like many mineral waters, they’re believed to have healing properties.

And so, I set off on a bus from Oaxaca to Mitla with a swimsuit packed in my bag despite the fact it was only 60 degrees out.

I first arrived in a dusty parking lot and was thrilled to find almost no one in sight.  It wasn’t immediately obvious where the pools were, so I started walking.  Heading past a long row of street food stands — mostly unmanned, at this time of the morning — I walked down a wide path with views of the surrounding mountains and tall cactus.

Just a few minutes later, I made it to Cascada Chica, the smaller of the two waterfalls.  Here, the clifftop is about fifty meters above the valley with several small pools and even one large infinity pool right on the edge.  Little known fact: the large, stunning pool is actually man-made.

Even today, water from the springs still flows, adding more calcium deposits to the site and changing the landscape ever so slightly.  The bubbling action is what gave the area it’s name: Hierve el Agua means “the water boils”.

Despite the name, the water is cold and at least on a cool morning, almost unbearably so.  As I often do, I soaked my legs and feet but couldn’t quite convince myself to fully submerge.

Although swimming is the most popular pastime here, there are hiking trails as well.  The most popular leads upward to the Cascada Grande, the main waterfall you can see from a distance.  A man waited at the start of the trail, offering to guide you in exchange for a tip.  “I’m okay,” I said — but he was persistent.  Although there’s technically no trail fee, good luck going on your own.

By the end of my visit, the food stalls on the path above were starting to fill up.  Tourists and families stood in line for quesadillas, tlayudas, micheladas, and my personal favorite: fresh mangoes dusted with chili powder and lime juice (25 pesos).

The vast majority of tourists visit on a tour from Oaxaca, which might include so many other stops that you end up seeing a half dozen places and experiencing none of them.  Tours vary from downright tacky to decent, with this Hierve el Agua tour being the only one I could find giving you a solid two hours at the falls.

I went by bus, which was cheap and relatively straightforward, but not fast by any means.  I spent more time than I expected waiting for connections, which is an unfortunate waste of time.

If you choose to go by public transportation, it will cost ~US $9:

Buses from Oaxaca to Mitla leave from the McDonald’s by Estadio Eduardo Vasconcelos.  From hotels near the Zocalo, that’s about a thirty-minute walk, so allow yourself plenty of time or budget extra for a taxi.  Look for a big sign saying “Mitla” in the window (some buses have digital signs with scrolling destinations, so look carefully!).  In general, these run every 20-30 minutes.  My bus was remarkably clean and comfortable.

The bus will take about 45 minutes, more or less depending on how many stops it makes for passengers along the way.  You’ll arrive in the small town of Mitla.  Any passenger onboard can verify you’re in the right place if you’re worried.

In Mitla, you’ll need to find a truck to Hierve el Agua.  These don’t depart on a set schedule and that’s where it gets complicated.  It’s up to the driver’s discretion on when it’s “full enough” to leave, which could be anywhere from 6-12 passengers.  I got there early, specifically to avoid crowds at the site as every guidebook recommends, and instead found myself waiting and waiting and waiting for my truck to fill up because no one else gets there early 🙂

From Mitla, there are two routes to Hierve el Agua.  The one most public trucks take is a dirt road up and over a mountain.  It’s uncomfortably bumpy, especially if you’re seated in the truck bed.  Leaving Hierve el Agua requires the same type of waiting: if you don’t see a group gathering under the awning to head back down the mountain, you may as well go get a cold beer.

If you’re still on the fence, find out if you’ll love or hate Oaxaca.

Staying overnight in Oaxaca? Book early at Hotel Parado de Alcala before the cheap rooms get snapped up.

Going anywhere else in Mexico? Check out all my articles like what to do in San Cristobal or why I love Cancun.