If I told you I was going to spend four weeks traveling with someone I barely knew, what would you say? 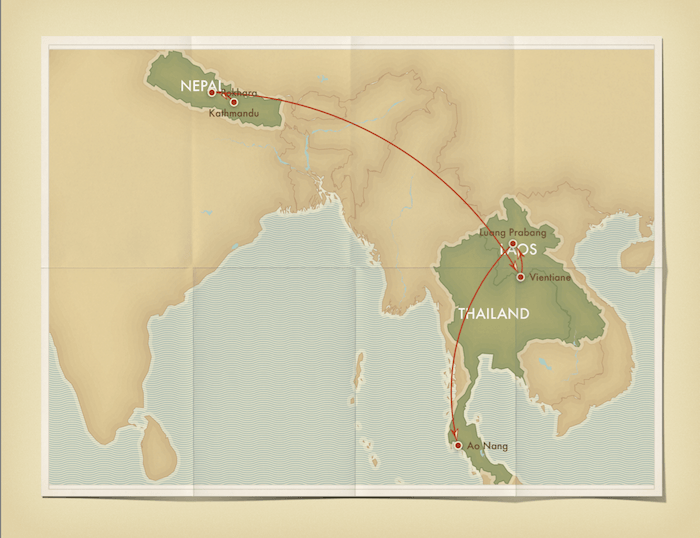 High off the excitement from my Competitours trip through Europe, I was beyond shocked the group leader emailed me to ask if I’d like to head to Asia with him this fall.  My initial reaction was eager anticipation and it wasn’t until about a week before my flight that I remembered I’d essentially be traveling with a stranger.  Yes, I had met him before and knew he wasn’t a serial killer, but when you got right down to it, I didn’t know very much about the person I’d be traveling with.

On our very first day in Kathmandu, I breathed a sigh of relief.  Steve was happy to eat street food, walk for miles and miles, and supported my 100-meter rule.  We were off to a good start.

…until later that afternoon and our differences in travel styles became apparent.

Just across the Bagmati River is Patan.  It’s much less chaotic than Kathmandu, making it a great place to learn about the area’s history and culture without getting overwhelmed while you’re still jetlagged and getting used to the idea that you may die from crossing a busy street.

I am a big believer in public transportation and have found that even when things go wrong, I at least have a story to tell.  I just assumed that to get to Patan, we’d walk twenty minutes to the bus station, find an uncomfortable seat on the local bus, and arrive at our destination 90 minutes later after getting lost two times.

Steve, on the other hand, did what any normal traveler would do: he hailed a taxi, overpaid for the journey, and got us there quickly and easily.  It was such an easy tactic that I ended up using this method throughout the rest of the trip.  Sure, the taxi cost roughly 20 times more than the bus fare, but it was still only $5 so I think it was money well spent.

Later that week as we were exploring Kathmandu, we took a side trip to Bhaktapur, another of Nepal’s ancient cities.  Our goal for the day was to find a thangka painting school, to try creating our own spiritual paintings despite the fact that neither of us is particularly artistic.  We walked into two schools, both of which said they normally offer courses but were closed for the Tihar holiday.

That was my clue to look into a Plan B for the day, but Steve wasn’t ready to give up.  He asked around until he found a teacher who was willing to spend two hours explaining the symbolism and history in thangka paintings to us — something more meaningful than if I had tried to draw a few things on canvas on my own.

Lesson #2: If you’re genuinely interested in learning something, someone passionate about that topic will be happy to share it with you.

Of course, if you’re going to ask someone to go above and beyond for you, you should be willing to show your appreciation and my travel partner is an absolute master of this.  He makes great strides toward making sure that new local friends are included at all times.  From buying them a beer along the journey to teaching card games (sometimes via pantomimes) to inviting them along on whitewater rafting trips, I’m really impressed by Steve’s efforts to include everyone.

Lesson #3: A tip is always appreciated, but taking the extra step to also treat someone as a friend is even better.

So far, the lessons I learned were positive, proving that there’s always something new to learn even if you travel frequently.  However, I quickly discovered along the trip that my travel companion was half-alien since he needed neither food nor water to survive.  As a mere human, I still require three meals a day and a reasonable amount of hydration.

Sometimes it was our tightly-packed schedule and/or delays that postponed our lunch.  Other times, it just seemed to be my metabolism.  I bought a lot of fruit shakes in Laos to boost my energy levels and was thankful I had packed a lifetime supply of KIND bars for on-the-go meal replacements.

Lesson #4: Never travel without snacks and a water bottle.

Since I travel solo frequently, I’m used to planning everything and the control that comes along with it.  Steve is ultra easy-going and left most of the trip in my hands — but traveling with a companion is still different than traveling solo even with a relaxed partner.

There were a few times when things didn’t work out as I expected: a hotel that was less-than-perfect, a hike I didn’t want to finish, and a day when I just wanted to stay in town and write.

When I’m on my own, I have no qualms making adjustments on the fly.  With a travel companion who I wasn’t 100% open with (unlike my family), I just pushed through the original plans.  It worked out and turned out fine, but the trip wasn’t always perfect.

Lesson #5: Talk about a communication game plan and expectations for how to handle last-minute changes before the trip.

While every trip has parts that go smoothly and others that might have a wrinkle or two, this trip turned out to be a lot of fun and a great adventure.  I’m not saying that traveling with a stranger will always work out, but it worked pretty well for me this time around.

Would you consider traveling with a stranger?  What about an “almost-stranger”?

7 thoughts on “What I Learned By Traveling With a Stranger”