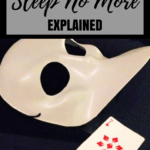 “From here, you have but one decision to make: up or down.”

I looked at the staircase in front of me, wondering if the direction I took would actually impact tonight’s choose-your-own-adventure theater. Not one to be indecisive, I went up, then wondering just how many flights I should go. Exiting on the fifth floor, I quickly found myself in an asylum, reading through patient records and walking past lines of cots and bathtubs.

After multiple trips to New York, I wanted to do something different. Sleep No More is New York’s best known interactive theater — a far cry from customary Broadway shows. There is (almost) no spoken dialogue, no barriers between the actors and the audience, and only a loosely-defined beginning, middle, and end. I had read plenty of Sleep No More reviews prior to my visit and still wasn’t quite sure what to expect. This isn’t a story: it’s an immersive experience like no other, sightDOING at its best.

In a converted Chelsea warehouse, theater-goers are welcomed to the “McKittrick Hotel” and challenged to participate in a story that’s one part Macbeth, one part Hitchcock, one part interpretive dance, and one part escape room.

Instead of sitting in an audience and watching the show, you’re free to independently wander and follow cast members as you wish. Each actor tells their own story, with other actors simultaneously telling interconnected stories in other rooms and other floors. You can’t watch it all, meaning everyone’s experience is unique.

That is how I found myself wearing a white Venetian mask, silently roaming through elaborately-designed sets, half entranced and half confused.

The show’s intensity is surreal. More often than not, I found myself chasing characters down staircases, barely keeping up with them to find out what happens next. At one point, I had to walk away from a nurse who never took her gaze off me, her eye contact burning a hole through my mask. Not once, but twice, I found myself completely alone in a silent cemetery that creeped me out so much I ran to a different set. To illicit such an emotional response is not easily done. Although I wasn’t technically part of the story, the show is clearly participatory.

Since there’s very little spoken dialogue, you’ll never know which details of the set and the story are integral to the overall message and which are merely ambiance. This forces you to focus on everything, look through family photographs, and rummage through drawers, all adding to the fully immersive feel.

I left the show unsettled, in an altered state of reality as I walked back to my hotel under the Chelsea Highline. I was on pins and needles wondering what I missed. I never did connect all the plot lines and I’m still unsure if I even met all the characters. Knowing that I only caught a fraction of the story is exactly what made it so intriguing.

Like me, you probably still don’t fully understand. To have Sleep No More explained fully would take hours. In fact, the creators of the show are so aware of this that they give you three hours to explore. Essentially, each character loops through their story in an hour and then they begin again, giving you three chances to take in as much as you can.

There are three main approaches to experiencing the show:

In my opinion, all three strategies would be equally successful, as long as you give each one long enough to sink in. I spent the first hour making my way through the set (approach #3) followed by watching specific characters through their journey (approach #1, repeated twice over for two characters).

Who Sleep No More NYC is NOT for:

What You Need to Know: The Logistics

The show is meant to be visited in silence. As a participant, I assure you the silence is necessary to hold the immersive feel.

Start early and end late. Buy the 7:00 tickets and stay for the full three hours. Frankly, I was lost the first hour until a little lightbulb went off! And even though things repeat, the finale holds a surprise.

You WILL be walking a lot, and possibly bounding up and down stairwells depending on the approach you take. This is New York and fashion is key, but at Sleep No More, you’ll want sneakers or comfortable flats.

If you have time, read Shakespeare’s Macbeth and watch Hitchcock’s Rebeccain advance (hint: I don’t think there are digital versions, so you’ll have to pop the DVD in at home instead of watching it on a plane). It’s NOT necessary, but if nothing else, it will put you in the right mindset.

Eat dinner beforehand, so you have energy and concentration throughout the experience. Then plan on staying for a cocktail at the on-site Manderley Bar to compare your experience with your travel companions. Flying solo? (I did) — you can reflect on what just happened while enjoying live jazz.

Have a glass of prosecco. You won’t be ready to call a night anyway, I promise.

The show sold out for the night I attended and seems to do so frequently, so I recommend purchasing tickets in advance.

The McKittrick Hotel was kind enough to host me when I mentioned their experience sounded a lot like sightDOING. I would’ve gone anyway and my Sleep No More reviews was not impacted by their generosity.

Spent all your money on the performing arts? Here’s how to save on the rest of your trip to NYC.
Want something more light-hearted? Try a scavenger hunt through SoHo that gives you an excuse to sample half a dozen desserts.
Going anywhere else in New York? Check out all my articles about the state I grew up in.
Like this post? Share it using the buttons below or follow me on Facebook | Twitter | Instagram | Pinterest

This post contains affiliate links. If Sleep No More Explained helped you plan your trip to New York City, I appreciate it if you use my links which helps support this website and the free information it provides.

1 thought on “Sleep No More Explained: A Look at Interactive Theater”