Although there were a lot of things about Nicaragua that appealed to me, I’ll be honest: the number one reason I wanted to visit was for the volcanoes.  Smoking Masaya was the first of three volcanoes I visited, but Cerro Negro was the most adventurous.  After all, it’s the only place in the world where you can participate in the extreme “sport” of volcano boarding.

Volcano boarding, in case you’re unfamiliar with the sport, is basically sledding down an ash-covered volcano.  Given its steep slope (41 degrees), it’s a thrill for adrenaline junkies.  With a recently waxed board and a little luck, you’ll zoom right down: rumor has it the speed record is 93 kilometers per hour.  Since I’m a little insane, this sounded like a lot of fun to me and not at all crazy.

The trip starts out with a 40-minute ride from León to the base of Cerro Negro (“black hill”), where you’ll need to register with the park service and leave behind all non-essential items.  There’s a strenuous hike to the top awaiting you, and you probably won’t want to carry any more than you absolutely need to especially since you’re responsible for getting your own ~12 pound board to the top.  Although the hike is relatively short at about 1 hour, it’s steep and it’s really hot.  This region of Nicaragua is hot to begin with, but when you’re spending your time on black ash without any shade in sight, prepare to sweat!

What no one tells you when you sign up is that Cerro Negro is an active volcano.  You’ll pass a few steam vents along your trek, which makes everything more exciting.  It has erupted 23 times since its formation in 1850, most recently in 1999.  Given how active the volcano has been historically, some people think it’s now “overdue” for another eruption and I certainly wouldn’t want to be boarding down while that happens.

Once you get to the top, it’s time to prepare for the moment you’ve been waiting for.  You’ll literally suit up in protective clothing, including gloves and goggles (flying ash can sting, not to mention make a mess of things).  It’s impossible to not look like a dork, as I’m sure I’ve perfectly demonstrated in this photo.

While you’re waiting for your turn to head down the hill, you’re rewarded with spectacular views.

Finally, you’ll scoot up to the edge of the volcano.  The slope starts out remarkably steep, which is perfect to build up speed quickly.  Just tip yourself over the edge until gravity takes over!

You’ll go fast no matter what, but to break that speed record, you’ll need to lean back as far as you can and balance your bum on the board so that none of your body directly touches the ash (no additional friction = a fast and smooth ride).

After trying volcano boarding, I can say it was a little bit hyped.  It’s definitely fun to ride down, but if you’ve ever been sledding, snow tubing, or otherwise, this isn’t completely brand new.  I’d absolutely say it’s worth doing if you’re in the area, but if I returned to León, I probably wouldn’t do it again.

Every tour agency in town offers this half-day tour, but in my opinion, you should really only consider two companies. 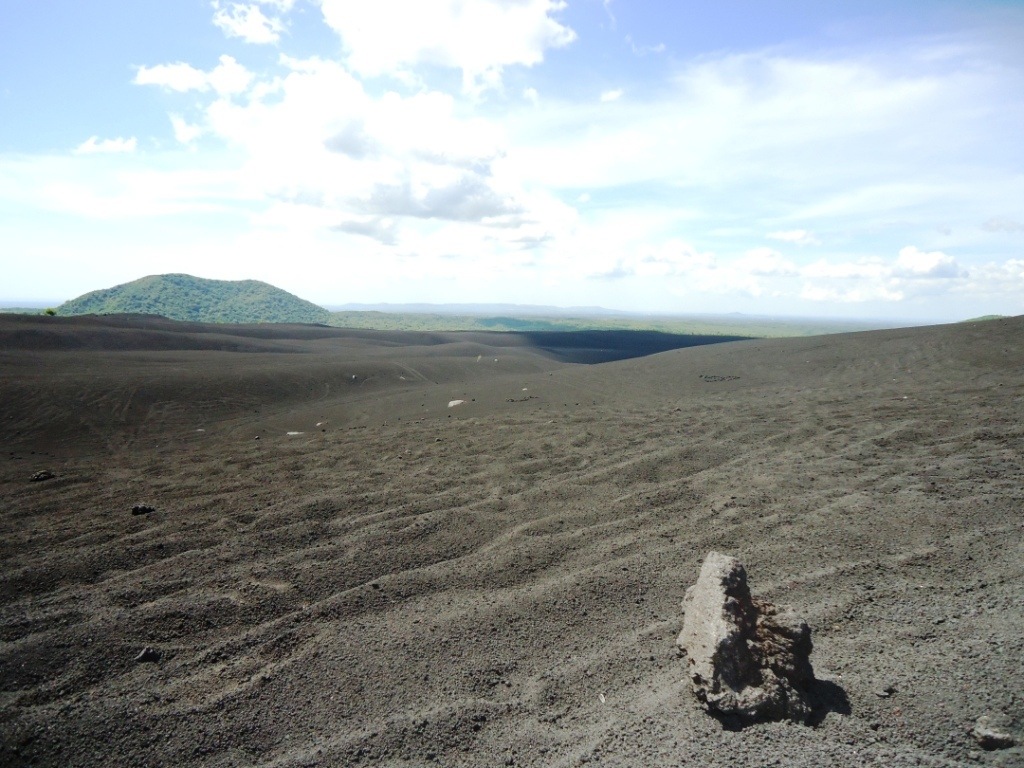 What’s the most unique activity you’ve ever tried while traveling?  Does it beat volcano boarding?  Let me know in the comments below!