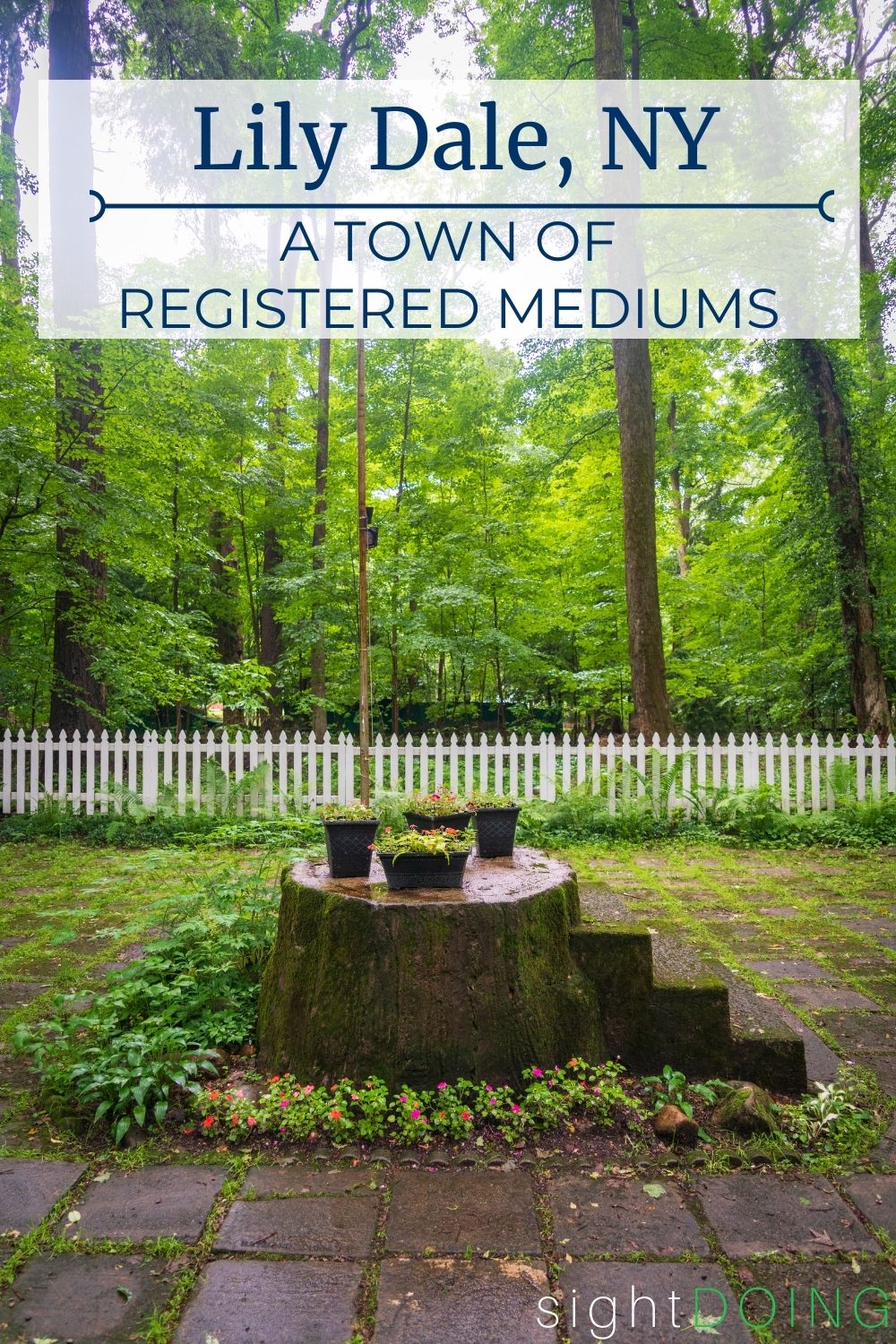 Tell anyone you’re talking to the dead and they’ll think you’re crazy. Unless you’re in Lily Dale, the largest spiritualist community in the world.

Only an hour away from Buffalo, I went to the Lily Dale Assembly intrigued by the bizarre. I thought that spiritualism — a religion based on communication with the spirits of the dead — had died out decades ago. Turns out, it’s alive and well, at least in this tiny hamlet in western New York. There, every single resident is either a medium or a member in good standing of a recognized Spiritualist church. There’s no halfsies in Lily Dale.

So as a complete and total skeptic, I let curiosity lead me there on a warm summer afternoon. I was far from the only visitor: in a nomal year, more than 20,000 visit, either to have a personal reading, to attend public demonstrations or to merely wander an area where the barrier between life and death is fuzzy.

Though I went in without an agenda, it was hard to shake my biases. To me, communicating with souls on the other side was a fancy parlor trick (or maybe just someone who spent too much time with a Ouija board growing up). I believe in legacy, memories, and everlasting love, but a line of communication with someone passed on? I wasn’t so sure.

As I paid my entrance fee at the gate — another strike against potential legitimacy — I rounded a few turns until I parked. A small lake sat on one side with a neighborhood comprised of Victorian houses that had seen better days on the other. Lily Dale was founded in 1879 and, well, it looked like some buildings haven’t been renovated since then.

Mostly, I wandered. I wanted inner peace and closure as much as anyone else there, but I didn’t actively seek it out. To meet with a medium requires an appointment and advance planning. Besides, I had a hard time shelling out $3 a minute to speak with someone who self-described as a “fairyologist”. In any case, many mediums this year are only holding readings virtually on account of the pandemic.

So I kept walking, ignoring the map I received at the entrance. Eventually, I found myself on a trail in the woods, gravitating naturally toward its stillness. One of only a few remaining old-growth forests in the state, it would be special if only for the ancient trees there. But there was something more: not an over-the-top forcefield but something more subtle. A resounding tranquility washed over me. I’ve hiked my share of trails and here was different, though for real or by power of persuasion, I can’t be sure.

These woods invited you to be quiet, to be still, to allow yourself to listen. It was clear that many others before me had done exactly that.

Time passed until my phone buzzed in my pocket. It was an email from a friend, saying exactly what I needed to hear about the loss of my dog three weeks prior. A coincidence? Or were the spirits reaching out in their own way?

I couldn’t believe it; the timing was too suspect. The waves of emotions that followed were equally unfamiliar. It didn’t feel the way it does when I visit loved ones at the cemetery or when I think of them with fond memories. My heart fluttered and my senses were astute. I sat there, nothing separating me from the earth while I remained in stillness and deep thought.

Eventually, making my way through a fairy forest and over to Inspiration Stump, I took a seat on a long bench with two or three hundred other people, all there for a public message service, one of several types of join-in services that are offered over the summer season. Registered mediums, both residents and visiting ministers, provide messages to select visitors in the audience. Over the course of an hour, four mediums reached out to 8 or 9 individuals, some providing loose, vague details while others were so specific it felt unlikely it could all be made up.

No one reached out to me directly, but it didn’t matter. There was one message I’m sure was intended for me, or at least a tiny part of me wants to believe it was. The description of the departed was exactly my grandmother, right down to the chair she was sitting on, the rings on her fingers, and the pie on the table. The message, too, was worded exactly the way she would’ve phrased it. As one medium put it, “Our loved ones work in many ways to bring us messages and signs. If you can take the message…do so! It is meant to reach you!”

I listened to more messages, ones that didn’t resonate with me but clearly did with others. Attendees, myself included, took comfort in what was conveyed and from the energy of our surroundings.

I left shortly after the service, meandering my way back to the car and out of this untraditional world. I still can’t tell you what was real and what was not, but I’m not sure it matters. At Lily Dale, the experience is focused on remembering the love you once had on this earth and honoring it for all it was and continues to be. I left with a full heart, a clear mind, and gratitude for the magic of Lily Dale.

Lily Dale is open year-round, though most visitors come in the official season between late June and Labor Day when there are meditations, healing services, message services, and more. In season, entry is $15. Off-season, you’ll have access to the grounds only, though admission is free.

If you’re interested in making an appointment for a private reading, you’ll need to make arrangements directly with your preferred medium (there’s no central booking, though Lily Dale Assembly maintains a list of registed mediums). You can choose the right medium for you based on their profiles or their public services (in person or via Facebook video). The going rate appears to about $90 per half hour, though again it’s set by the individual.

Whether or not you buy into spiritualism, it’s an eye-opening experience you won’t find just anywhere.