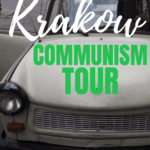 I’ve never been the type of person to comprehend things without feeling or touching them in some way, so even though I learned about communism years ago, I didn’t know what it was really like to live through it.

The solution?  SightDOING and a Krakow communism tour.

I laughed a little when our Trabant pulled up to the hotel and my husband gave me a sideways glance.  The plastic vehicle is a “spark plug with a roof”, but in communist Poland, it was the people’s car.  Our guide greeted us as his comrade and invited us to squeeze in the backseat.  Even at 5’4″, my knees were shoved into the driver seat in front of me.

A Trabant is just five basic engine parts, with a two-stroke generator and a whopping 18 horsepower.  It was incredibly popular, easy to maintain, and somewhat affordable (if you were patient enough to wait your turn on the list to buy one).  And for our tour, we probably wouldn’t have to push it to get it started or worry about rain leaking in from the windshield.

So off we went to easternmost Krakow, to the planned Socialist district of Nowa Huta.

Our first stop was Stylowa, the only restaurant in Nowa Huta.  The name means stylish, an ironic title for a place that’s a little dusty and filled with busts of Lenin.  Nothing’s changed from it’s hey-days, down to the decades-old cigarette burns and ’70s-era curtains.

We poured over black and white photographs with a strong cup of coffee.  After all the hardship Poles went through during WWII, it’s no surprise that many people were hesitant to accept even more change.  But Stalin’s goal was to build a picture-perfect Communist community on the outskirts of Krakow.  The intention was to create a town ideal for propaganda and Nowa Huta was one of only four European model utopias.

Nowa Huta, or new steel mill, was created on one of the most fertile sections of Krakow.  With farmland destroyed, local farmers had no choice but to look for work in heavy industry.  The massive Vladimir Lenin Steelworks opened in 1954 and the city grew rapidly.

If you’ve ever visited a Communist city before, you’re familiar with the architecture.  Wide boulevards, both for propagandic parades and military tanks, flank the squares.  Huge blocks of flats each only have one entrance, easily blocked off when needed.  The tops of buildings had space for spies and snipers.  The good life came with a few trade-offs.

Heading inside the apartment was a new experience for me.  With pickles and ice cold vodka — always — we were welcomed into an unchanged living room.  I was impressed that it was larger than my previous rental in Richmond, until I remembered a whole family shared the space.

There is memorabilia for the entirety of the Communist period in this flat, but the most impactful part of our visit was the actual propaganda commercial for moving to Nowa Huta.  I spent the prior day touring the Schindler Factory and Auschwitz and I could empathize with the desire for a perfect life after such hardship.  Nowa Huta offered jobs, comfortable homes, even modest prosperity.

The reality of Nowa Huta didn’t live up to its showcase status.  In hindsight, it’s easy to see how dirty and flawed it was.

But for just a few hours, I almost allowed myself to be brainwashed.  Putting myself in the footsteps of a country that had been terrorized for so long, I wanted to believe the video and the city claims.  That’s the part history classes leave out: that feeling of why communism was so appealing and why so many people were willing to give it a shot.

It’s one thing to read about it in the history books and yet another to see, touch, and taste it firsthand.

If you go on a Krakow Communism Tour…

There are several companies offering tours of Nowa Huta, but we went with Crazy Guides based on my parents’ recommendation from a previous trip.

Crazy Guides offers two versions of the tour, both with a communist district visit in a Trabant.  We upgraded to the Deluxe tour which includes lunch at a milk bar, as a chance to be “more equal” than everyone else.

3 thoughts on “Dear Comrades, Wish You Were Here”