My first night of dance in Richmond was intimidating, to say the least.  There were 30 women, each of whom have been studio members for years and now knows hundreds of dance routines.  They meet up for dinner and drinks outside of class and were all wearing shirts with the same logo.

Then there’s me.  I can’t swing my hips to save my life and spinning makes me dizzy.  On top of that, I’m “goofy foot”, which means I’m always starting on the wrong side because my dominant foot is the opposite of normal.  But I was bored and needed a healthy hobby, so I went to dance anyway.

Sure enough, the music starts and everyone around me looks like a backup dancer for Beyoncé while I look like one of these: 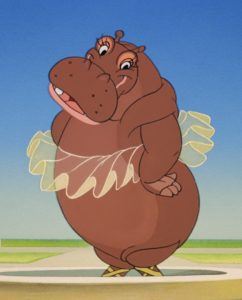 My first night wasn’t pretty.  I was constantly two seconds behind everyone else, flailing my arms every which way, tripping over my own feet, and wondering how I ended up front and center when everyone else was facing the back of the room.

>>>>> Related Post: “Dancing” the Tarantella in Sorrento, Italy (opens in a new window)

I like to think I’m a good sport, so I went back a second time for “Dance 101”.  You have thirty minutes to learn a routine start to finish.  It’s only semi-helpful because I still didn’t know what kick-ball-change means.  Even in a best case scenario, you only learn one dance and there are 14 more that night to sink or swim.  Most of the time, there are no formal instructions, no moves called out verbally, and a sign language that makes no sense.  I mean, if someone made the A-OK hand signal over both their eyes, would you know what to do next?

I know what you’re thinking — what the heck does this have to do with going to Spanish school in Central America?  But I promise you, learning to dance and learning to speak a new language are practically the same thing.

Memorization is one way to accomplish something but it takes a ridiculous amount of repetition in order to be successful.  That’s totally cool, assuming you have the ability to practice with that frequency.  But if you only have one week of Spanish classes or if you want to learn the moves to the dance chorus before the song ends, you have to pay attention with a great amount of focus.  It’s mentally exhausting but it’s a hundred times more effective.

Most adults have forgotten how to do this.  You’re not learning something new as often as a child is, so it might not come naturally anymore.

What works for me: trying things in short spurts whenever possible (I’d rather take a 1-hour class than an 8-hour workshop) and setting a realistic goal for your session so that you keep your intention in mind throughout your practice.

You have to put yourself out there, even if you think you’ll end up embarrassed

Have you ever listened to a five-year-old sing along to their favorite songs?  Half of the lyrics are wrong and often nonsensical.  They don’t care because a) that means they got half of it right and b) it’s still a lot of fun.  That’s how I feel about dance, especially since next time I just might get a little more right.

Somehow Spanish — which is a “real” skill and not just a fun hobby — felt like it was on a different level when I was studying.  I wanted things to be perfect, which meant I was silent if I didn’t think I could say something correctly.  In reality, you’ll make more progress if you give it a shot.  If someone gives you a funny look and you realize you screwed up, just let them know you’re a student.  They’ll probably help you out, or at least give you a second chance.

>>>>> Related Post: A Day in the Life of a Spanish Student (opens in a new window)

Almost every song follows the same pattern: intro, verse, chorus, verse, chorus, change, chorus, ending.  Once I learned that, I started realizing I may already know the dance moves to the chorus and don’t have to learn something brand new halfway through the song.

Ready to dance? 'Hands in the Air' tonight at 6pm. Song: @timbaland @neyo

In any language, there are thousands of verbs to choose from.  There’s no way you can practice conjugating them all, but if you understand how to conjugate a verb tense and you have a grasp on which verbs might be irregular, you’ll get it right more often than not.  Just go for it and you’ll surprise yourself how much you know without officially learning it.

Sometimes it’s easier to learn without being taught

When it comes to difficult combinations — whether dancing or speaking — there can be rules or formulas that just don’t make sense.  No matter how many times a teacher explains it, you’ll probably just end up confused.

That’s why it can be easier just to watch, listen, and figure it out on your own.  Eventually, something will just feel right to you and your brain will repeat it correctly because that’s how it’s always done.  Muscle memory takes over and it becomes second nature.

You may never know it all

A few weeks ago, my Nicaraguan neighbor introduced me to his friend César and the three of us were chatting in Spanish.  Everything was going great, to the point where sometimes I even surprised myself with the vocabulary coming out of my mouth.  Buried deep in my brain were things I didn’t even realize I knew how to say.

And then I dropped the ball.  César offered me another beer, which I politely declined because “I was dehydrated and thought the alcohol might make me pregnant.”  It’s a common mistake that a lot of students make — pregnant and drunk sound semi-similar in Spanish — and there I was, messing up deep into my Spanish studies.  The same thing happens to me in dance: sometimes I screw up parts that I know I’ve learned and other times there’s a new song and dance I’ve never learned so I’m thrown back into the fire.  Sometimes you just have to laugh it off and try again.