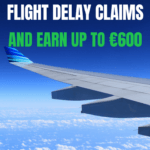 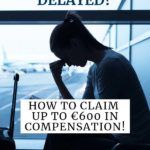 We’ve all been there: those days when flight delays rack up until next thing you know, you made it to your intended destination hours later than expected. That’s frustrating — and in many cases, disruptive! — but if you’re traveling to or from Europe, you may be eligible to file an EU flight delay claim to get compensation for your troubles.

Regulation EC 261/2004, better known as EU 261, establishes compensation and protection for travelers who experience flight delays, cancellations, or denied boarding for travel in the European Union.  It’s meant to hold airlines accountable for delays that were in their control.

Essentially, long delays and cancellations can lead up to 600 euros in compensation!

EU 261 covers a broad spectrum of passenger rights, but for the purposes of this article, I’m focusing only on your flight delay rights (which I believe is the most common aspect of the regulation).

To start, consider these main takeaways:

As long as you understand the general concept, you can always look into the fine details later!

So, What Financial Compensation is There for EU Flight Delays?

The amount of compensation depends on how long the delay is and how far you are flying.

Keep in mind: if the airline re-books you on a different flight that’s on a similar schedule to your original flight, you might not be eligible for compensation.  On the bright side, you got to your destination as expected!

Some of the Major Fine Print

As far as I’m concerned, most of the fine print is perfectly reasonable.

You, the traveler, need to be traveling on a publicly available fare and you need to check in properly and show up at the airport for the airport.

The biggest piece of fine print: the delay had to have been caused by something fully in the airline’s control.  Weather DOES NOT COUNT.  If there’s an outage with air traffic control systems, it does not count.  If baggage staff are on strike, it does not count.

The fine print that everyone overlooks:

I knew something was wrong when my flight hadn’t started boarding even though we were supposed to depart in 35 minutes.

Next thing I knew, the gate agents were announcing a mechanical delay of “at least two hours, but it could be longer”.  All said and done, we left Amsterdam more than four hours late.

In my case, the airline handled the in-airport experience quite poorly.  Gate agents flat-out refused to rebook anyone who knew they’d miss their connection because of the delay, which meant most travelers just sat in the airport worrying about how they’d get home.

The smartest travelers were proactive: the airline website and app allowed free rebookings if you did it independently and for complicated rebookings (like mine), phone agents were available and helpful.  Remember, no one will advocate for you better than yourself!

Additionally, EU261 states that airlines are supposed to provide food and drink during flight delays.  In my case, the airline came around with cookies.  That’s not a great substitute for a real meal — not to mention there was no beverage to speak of.  Theoretically, I could have put up a fight or been refunded for the €13 I spent on food and drink at the airport during the delay, but that wasn’t worth my energy.

Also worth noting: when I arrived in Newark, I had an automated email from the airline saying “We’re sorry.  Click here to accept compensation.”  I was happy to have an immediate acknowledgement of the issue, but disappointed when I was offered $100 in vouchers or 5,000 miles.  EU 261 offers far more than that, as long as you know to ask for it!

How to File an EU 261 Flight Delay Claim

Like all complaints, you’re best off by sticking to the facts and keeping things polite.  You’ll want to share pertinent information without rambling and include back-up materials whenever possible (like screenshots and receipts).

In general, you’ll probably have the best luck dealing with someone in person before you ever leave the airport.  Airport staff are usually already aware of the delay, so there’s less to catch them up on. In clear-cut cases, you may even leave the airport with cash in hand! For my own delay, none of the agents at my departure or arrival airport were willing to help me, so I had to reach out by email instead.

I was recently on Flight 456 from YYY-ZZZ on July 1 (Record locator ABC123 and ticket number 0123456789).  The flight departed over 4 hours late, due to a mechanical issue.  Both ground staff and flight crew acknowledged the technical problems and delays and confirmed we were eligible for compensation.  Therefore, I am writing to formally request compensation under EC 261/2004.  A check may be mailed to the address submitted with this form.

A screenshot of our departure delay (from the airline app) is attached.

As always, I appreciate all of the excellent service I receive on Preferred Airline.

(You can also fill out and attach this complaint form if you’d like to cover all bases).

I got an auto-response that someone would get back to me in 7 business days, which felt like an eternity.  Sure enough, in less than a week, someone acknowledged that I qualified for compensation under EU 261 and gave me several options:

I chose the vouchers, since I was 100% confident I could use them and wanted the immediate payout rather than having to keep track of records for another six weeks until I got a check in the mail.  For many people, the cash may be the best option since there are no expiration dates or strings attached.

When is it worth it to use a service to file your flight delay claim?

If you can’t find a customer service email or if your case isn’t clear cut, you may want to look into hiring a service to help you. These services will file the claim on your behalf, and if needed, fight the case in court. You don’t have to do anything.

Generally speaking, you don’t pay anything upfront to use one of these services, but they will automatically take a 25% cut of your compensation from the airline. That makes them very motivated to fight on your behalf, since they only get paid if you do.

If you think you can get compensation by independently filing a flight delay claim, that’s best. You’ll get the full amount! But if you’re not confident that you’ll win on your own, these services have years and years of experience for filing successful claims. They know precisely who to talk to and how to make sure an airline doesn’t wiggle out through a loophole or a “he-said-she-said” type argument.

Of all the services (and I tested several), my favorite is AirHelp because they have an easy to use interface and communicate clearly and promptly.

Having travel insurance is always a good idea because it can help reimburse unexpected expenses even when EU 261 doesn’t kick in.  Some of you may remember when I was stranded in Panama for 4 days because U.S. east coast airports were closed for snowstorms.

It will also reimburse costs like a rental car if you are re-booked to an alternate airport or the costs of buying a change of clothes if your luggage doesn’t make it at the same time you do.

I personally use and recommend RoamRight.

I give a brief overview on passenger rights in the European Union + my experience with an EU Flight Delay Claim on the Miles To Go Podcast!