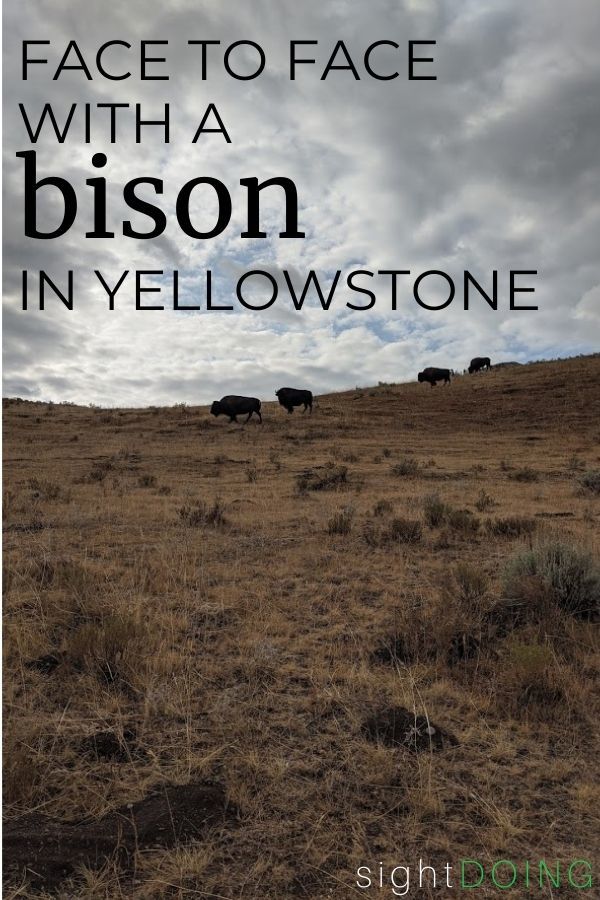 I was headed happily downhill when I felt the palm of my husband’s hand firmly against my belly. I stopped dead in my tracks, not daring to take another step. I’ve hiked often enough to know that this was his signal to stop — now — without a word being said.

My eyes darted every which way, attempting to see whatever it was he’d already seen. Usually he’d use this signal for rattlesnakes, but there weren’t any; I was sure of it.

The trail bent around a corner and I couldn’t see far. It didn’t feel like bear territory and there was certainly no scat anywhere. I didn’t hear anything despite my strains to listen closely. Something was wrong, but I didn’t know what.

Silently, we both stepped backward. I’m not normally very sneaky on the trail, but at this moment, I was. Three steps backward, my position changed just enough to see him: a 1500-pound bull bison standing just around the bend in the center of the trail.

Up the ridgeline, to my right, was a family of three hiking down the trail. Putting the puzzle pieces together, my best guess is they were heading down while the bison was heading up. Like most animals, he wasn’t looking for trouble, so he turned around when he saw them blocking his way. Except he hadn’t counted on another party — us — coming from the other direction.

It wasn’t hard to read the bison’s mind while he looked around. He had to stay on the trail; the hillside was too steep to go any other way. He was boxed in. He was trapped.

Slowly, we kept walking backwards, one step at a time. We could see the other hikers doing the same, collectively giving the bull a wider berth. No one wanted to make any sudden movements. Bison look docile, especially in Yellowstone where there are always tourists around, but this one was scraping his feet on the ground. His tail raised. Clearly, he was agitated.

Not many park visitors seem afraid of bison, but that’s a rookie mistake. Every summer there’s a news report of a bison attack in the park, usually because someone gets too close. Bison can run as fast as a horse and are surprisingly agile. Unless you’re a professional bull fighter, you don’t stand a chance if they decide to charge.

Eventually, we cleared decent ground, until at least 100 feet separated us from the bison. There was another 100 feet or so between him and the other hikers. Even though we could see him start to relax, we kept adding distance. We stopped behind a small grove of trees, hoping the extra obstacle was to our benefit.

Without incident, the bison once again turned around, heading back up the trail the way he intended in the first place. We had avoided a confrontation, but it raised my blood pressure a little. Once it appeared the coast was clear, we watched him walk away in awe.

Even after he walked away, we modified our hiking plans. We had intended to go the same way he did: up the trail and ultimately to a suspension bridge over the Yellowstone River. Unwilling to push our luck and run into him again, we gave up our arbitrary destination and skipped the scenic detour.

As far as I’m concerned, when in Yellowstone, bison always have the right of way. 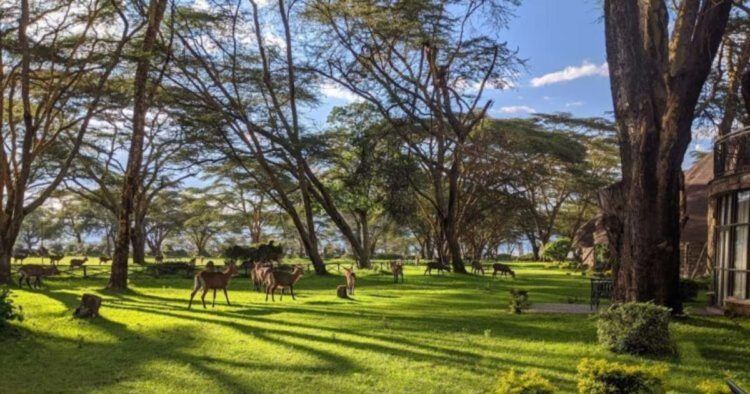 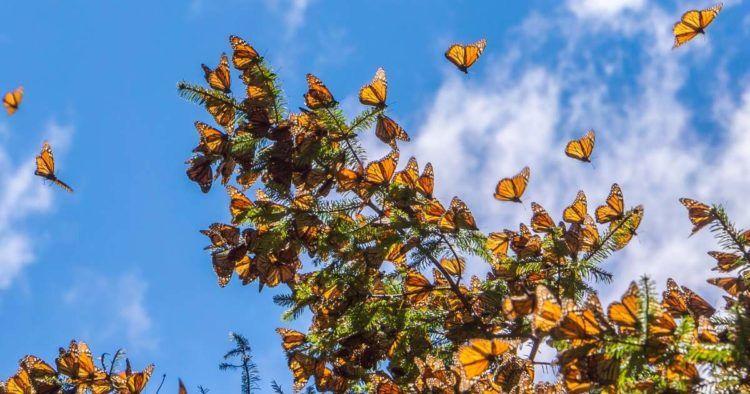 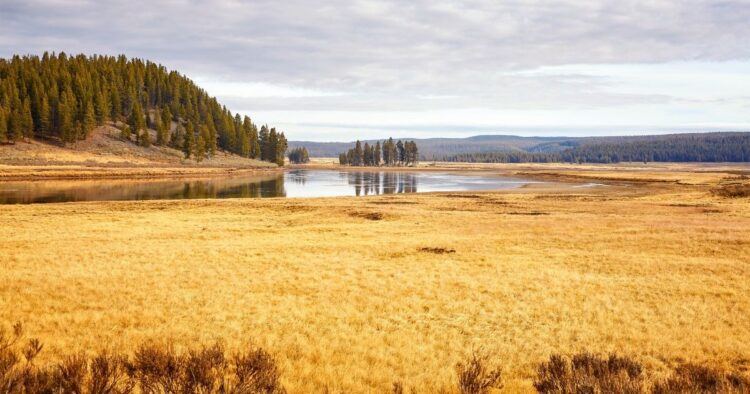 Pros and Cons of Visiting Yellowstone in September 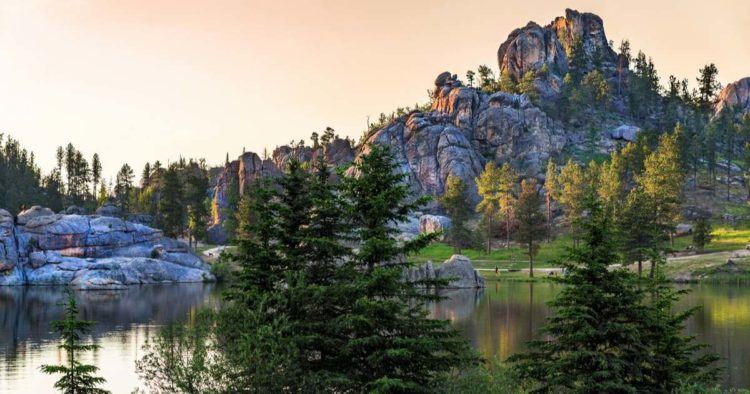 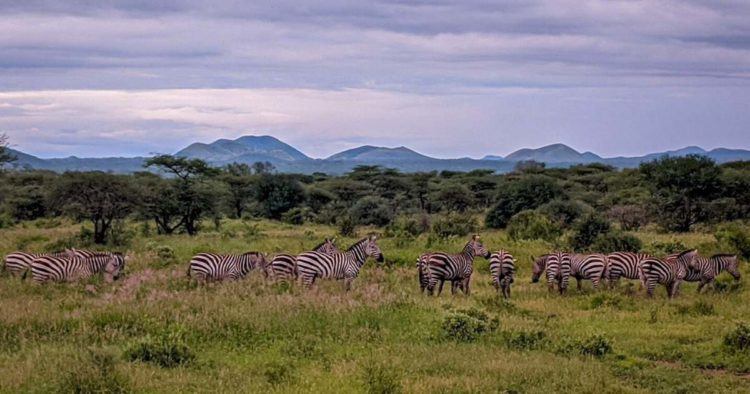 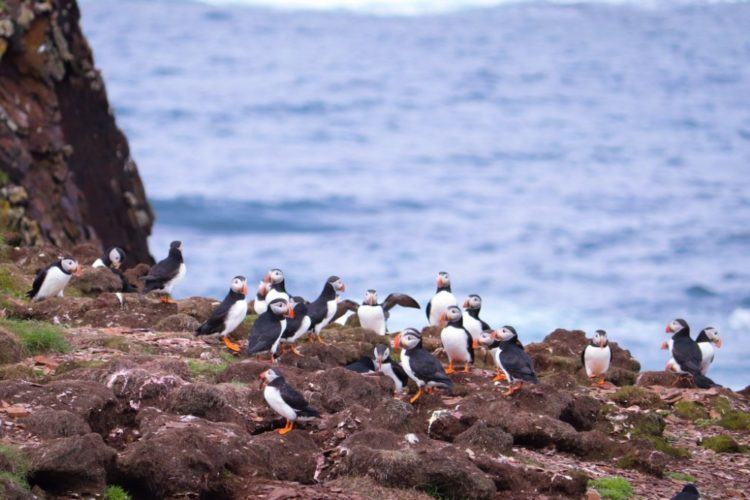 2 thoughts on “When in Doubt, Bison Have the Right of Way”